We’ve seen a lot of discussion and debate in recent years on the nature of heaven, hell, and what happens after we die. But these discussions are nothing new. The church has been debating eschatology (the study of last things) ever since the time of Christ, and the Jews before Christ were discussing the same.

Scripture provides many insights about the afterlife. But when theologians combine these insights into a coherent whole, they come to some very different conclusions about what the Bible teaches. The nature and duration of hell is one such example.

The church throughout history has consistently taught that everyone dies, that they will be raised again, and that they will be judged. But Christians have never reached full agreement about what happens to the unrepentant after judgment. The three broad streams of thought on this matter are eternal torment, conditional immortality, and universal reconciliation.

Eternal torment (also called traditionalism) has been the most widely held belief about the nature of hell. According to this view, the unsaved will suffer in hell for eternity. Many who hold this view teach that hell is a place with literal fire that burns but never consumes. Others suggest that the fire should be interpreted metaphorically, representing the anguish of separation from God.

Conditional immortality (also called annihilationism) is based on the idea that human souls are not inherently immortal. Conditionalists teach that only God is immortal and that human immortality is only possible through union with Jesus Christ. Thus those who have rejected Christ will not continue living in any sense. They believe that hell is a place of complete destruction.

Universal reconciliation (also called Christian universalism) teaches that people in hell can still repent and place their faith in Christ. Unlike the pluralist version of universalism, Christian universalism affirms that Jesus is the only way to God. Adherents to this view believe that God never stops pursuing the lost, even after their judgment. So in theory, everyone can eventually be saved.
These descriptions of course are generalizations, and theologians have held any number of variations on these views. And hell is not the only debated topic—just as much discussion surrounds the nature of heaven, the New Jerusalem, and the intermediate state between death and resurrection.
Join the discussion with the Late Victorian Eschatology collection. These six volumes, written more than 130 years ago, tackle many of the same questions we’re still wrestling with today. 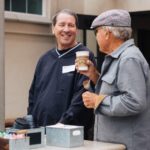