The church’s emphasis on abstinence in dating sometimes leaves people feeling as if the Bible says that sex itself is bad.

Not only is that not what the Bible says . . . it’s not even close.

Sex was designed to be good. Within the context of marriage, it is good. Physical intimacy grows more meaningful the better you know your partner and the more you care for them.

But when our culture says that sex is good in other contexts, that’s where there’s an inherent conflict.

Related post: 3 Views on the Relationship between Christianity and Culture

“Why are the magazines always pushing [sexual] technique?” Pastor Matt Chandler asks in The Mingling of Souls. “Well, if you’re having sex with different men or women and it doesn’t bring you lasting joy or fulfillment, the only hope you have for intimacy and sexual fulfillment is to improve your technique.”

“Sex outside of marriage,” Chandler says, “is deliberate disobedience of God’s commands, which are for your good, and therefore it is a deliberate forfeiture of your own spiritual well-being, as well as your own sexual well-being!”

So what does the Bible actually say about sex, as it’s intended to be had? In The Mingling of Souls, Chandler digs into the Song of Solomon to find the answer.

Here are 7 things Matt Chandler says the Song of Solomon tells us about sex:

Song of Solomon 4 takes us into the bedroom of Solomon and his bride, immediately after their wedding. Over the course of their relationship they’ve exposed their hearts to one another, and now, finally, their bodies. But they don’t rip their clothes off and jump into bed. After all of that waiting, and all of that patience, they take their time.

Chandler says that if we misread this intimate experience, “we may set ourselves up for having our joy stolen.” It would be easy to read this and expect far too much from ourselves or our spouse—but that’s our culture talking, not our Bibles.

“Between the buildup of anticipation, the nirvana-like category our culture has assigned sex, and the long, long wait, sometimes that first time is built up out of proportion.”

Our culture is often caught between an ideology that suggests that sex is simply physical—where the timid, delicate stage of virginity is something to “get out of the way” so you can enjoy more sex with more people—and the reality that sex is actually a far more powerful experience when combined with love (and the emotional and spiritual intimacy that comes from familiarity).

Giving yourself to someone is a moment to savor with someone you’ve committed to be with forever, not just for now.

So Solomon takes his time appreciating the beauty of his bride. “He started from the top,” Chandler says, “and worked his way slowly down, doling out praise in a very measured fashion.”

His intimate knowledge of his bride told him that to love her well, building her confidence in her body image was the place to start.

“We know from the previous chapters that she likely carried around some insecurity about her body, about her appearance . . . Solomon knew this. And because Solomon was very wise, he also knew that insecure women do not feel safe. Nor do they feel free and sexually uninhibited.”

He compliments the face he sees behind the veil (Song of Solomon 4:3–4), showing his desire and appreciation for her as she already is, as if to say, after all this waiting, “Even just looking at you is pleasurable.”

This slow, methodical approval of her physical beauty doesn’t hinder the experience—it enhances it. “And what we see in his slowness, his poetry, his wise understanding of how she was wired and what she needed to hear,” Matt says, “Is that marital sex according to God’s Word is romantic.”

“Your two breasts are like two fawns, twins of a gazelle, that graze among the lilies” (Song of Solomon 4:5).

Solomon’s metaphor for his bride’s breasts shows us that despite their mutual affection and desire for one another, Solomon knew her nakedness was delicate. Her body was something to gently approach. Carefully. Slowly. It was not something to snatch up greedily.

“I often hear guys complain about the frequency of sex in their marriage,” Chandler says. “But I can tell by the things they say and the way they say those things that they may be their own worst problem. I want to say to them, ‘Maybe if you quit groping your wife, she’d be more interested.'” Sex is designed to be mutually satisfying. Our anatomies allow for both partners to be satisfied during sex, but the means by which we get there are different, and we’re naturally inclined to focus on pleasing ourselves first.

Solomon, however, took his time to carefully, slowly, approach his bride sexually.

“He was interested in more than his own gratification,” Chandler says. “He wanted his bride to feel sexual pleasure too—but beyond that, he wanted her to feel loved.”

Chandler believes one source of frustration in the bedroom is pornography, or perhaps more broadly, the root of pornography—male lust. Pornography and the sexualization of all-things-women creates false expectations. It’s not a real picture of sex because it’s only one half of the equation. You need a real, broken man and a real, broken woman to complete it.

“Sex the way God created it to be is very romantic and, yes, very intense,” Chandler says, “But also very tender.”

If the intensity of sex is not mutually desired, it’s selfish. At best, the selflessness is one-sided. Tenderness ultimately leads to the most loving, mutually satisfying outcome.

“Until the day breathes and the shadows flee, I will go away to the mountain of myrrh and the hill of frankincense” (Song of Solomon 4:6).

Solomon’s vivid (and perhaps, seemingly bizarre) descriptions of his wife’s body continue as the encounter becomes increasingly sexual. Reading with modern eyes, it’s easy to miss how his carefully-picked compliments continue to dissolve his wife’s insecurities. He refers to her body as an impossibly beautiful thing he could have only imagined, as she stands completely naked before a man for the first time.

Chandler says, “He was out of his mind with passion for her. There were mountain peaks, wild animals—a romantic ferocity, a passion taking place. They were being transported! Maybe you’ve heard some sexual encounters described as out-of-body experiences. This was one of those. They felt swept away. The passion was so great that this sex became about more than sex and physical gratification. It became the culmination and the means of something greater, something beyond themselves.”

This wasn’t the sinful shadow of passion one feels in a moment of lust. This wasn’t two people ruled by instinct.

“The couple in the Song of Solomon possessed a passion akin to adoration. It was awash with glory, not about urges but unction.”

When you read Song of Solomon 4:12–15, you see a master gardener comparing his wife to a garden full of the most treasured spices and “choicest fruits” some of which are impossible to grow in the same place. He was comparing her body to something no one had ever seen before, something beautiful and valuable and unique—all using other things he loved, cared about, and invested in.

“But this was bigger than just a myth found to be true,” Chandler says. “It was a parallel discovery to the wonder of God’s glory. The freedom of the marriage bed is seen here to be a correlation of, for instance, entering the Holy of Holies after being forbidden access for so long.”

“And that is why sex is holy—it is meant to remind us of the God who gave it to us, who takes joy in union with his people. We don’t need to overspiritualize sex to see it this way; we just need to approach it the way the Bible ordained it and be grateful for it.”

“What we see here in an ideal sexual encounter between husband and wife,” he says, “is a mutually enjoyable and mutually expressive love. And it can remind us that men desire for their wives to desire them too.” 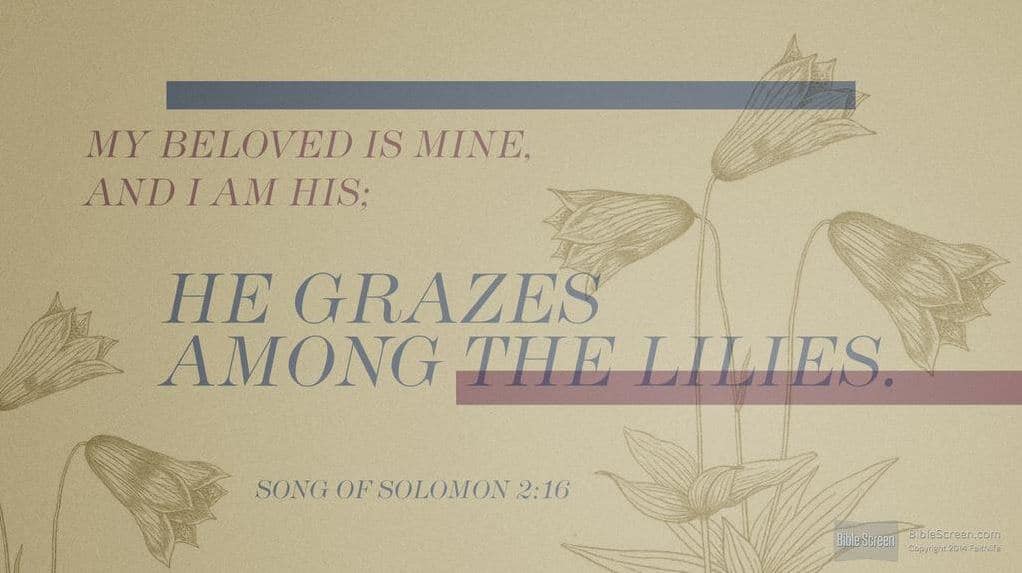 Matt goes on to say that he believes intimacy issues often result from one spouse being unable to reciprocate this desire. This inability to reciprocate, he believes, comes from a distorted understanding of sex—when one spouse sees it as dirty, forbidden, or still somehow sinful (which could be the result of past sexual sin or trauma).

But I think the inability to reciprocate desire can just as often stem from a different lack of reciprocation. Here’s what I mean. If men and women do in fact naturally enjoy sex in different ways, and we are more likely to naturally do what feels good to us, that could drastically change how your spouse understands you when you say that you want to have sex.

You might mean that you want to do something mutually enjoyable and fulfilling, but if that isn’t what sex has been in the past, it’s certainly understandable that one spouse might not desire that as much as the other.

If sex is always about you, you can’t expect your spouse to desire it with the same frequency that you do.

And the reality is, mutually pleasurable sex is more enjoyable to both individuals.

Drawing from extensive surveys, Shaunti Feldhahn concluded in For Women Only, “even if they were getting all the sex they wanted, three out of four men would still feel empty if their wife wasn’t both engaged and satisfied.”

“The truth is,” Matt says, “for men, sexual reciprocity is extraordinarily pleasing and satisfying in ways mere sexual release is not.”

“I came to my garden, my sister, my bride, I gathered my myrrh with my spice, I ate my honeycomb with my honey, I drank my wine with my milk” (Song of Solomon 5:1).

At the end of their time together, Solomon and his bride were full—or rather, drunk (Song of Solomon 5:1)—with love. They feasted, and they were satisfied.

Lust always wants more. It’s an appetite that’s just as insatiable as the “hook-up” culture is unsustainable. Sooner or later, it collapses along with the broken people left in its wake. Lust steers us towards a desire for more, but without the emotional and spiritual commitment of marriage—without love—it cannot serve the purpose it was designed for. It cannot lead us to the moment when we are full.

“If you want to see sex as God created it to be, Song of Solomon 4 is it,” Matt says. “When you bring in the context of what led to this moment in the Song as well as the Bible’s teaching on sex in other books, you can see that God is not stingy with joy when it comes to sexuality. If he gives you a gift, he wants you to enjoy it as it is designed to be enjoyed, which will ultimately lead to your satisfaction—not only with the gift itself but also with himself as the Giver.”

7. Sex is about the Gospel

For some, comparing their marriage or sex life to Solomon’s can be as disheartening as comparing their life to Jesus. Chandler calls the Song of Solomon a picture of God’s ideal marriage—two broken people becoming one flesh as they express a profound love for each other.

Ideals are a double-edged sword. Striving towards something we know we can never reach takes us closer to perfection, while at the same time, leaves us with that haunting feeling that we’ll never get there.

At least, not on our own.

“If Jesus wanted the broken version of you,” Chandler says, “Can you find the strength to want your broken spouse?”

A single blog post can hardly cover everything the Bible says about sex. That’s why Matt Chandler wrote The Mingling of Souls—a book about the Song of Solomon and its implications for your marriage.