It’s one thing to talk about engaging, interacting with, or “reclaiming” culture. Putting our theories into practice is another thing entirely.

In Every Square Inch: An Introduction to Cultural Engagement for Christians, Dr. Bruce Riley Ashford highlights six Christians whose lives model various perspectives on the relationship between Christianity and culture. Each of his examples are well-known for their influence both inside and outside the church. Few, however, held as many positions of influence as Abraham Kuyper: pastor, journalist, newspaper founder, professor, university founder, parliament member, and prime minister.

“From these many vantage points,” Ashford says, “Kuyper sought to work out the implications of the gospel. Both his writings and his life story show us a Christian who, like Augustine, not only critiqued culture, but made culture.”

Ashford summarizes some of Kuyper’s most important teachings in nine points:

“1. God’s creation is good and remains structurally good, even after the fall. This point is significant for a discussion of culture because cultural realities are creational. They stem from God’s created humans interacting with this created order.”

Notice that culture isn’t something we directly create? It’s an indirect product of the way we navigate God’s creation. We can’t just snap our fingers and change culture. When American culture finally realized the immorality of slavery (which took years of people speaking out against it), the changes may have appeared to happen suddenly, but the roots of that culturally-accepted evil were so deep that we still see the ripples of racism today. In order to see real, meaningful change in the relationship between African-Americans and white Americans, our culture had to crawl through a series of significant changes which gradually altered the way people understand and navigate that relationship.

“2. God’s creation is a unified diversity, an ordered but multifaceted reality. In particular, God designed the world to have diverse cultural ‘spheres,’ such as family life, art, science, church, and business. Each sphere is unique and has God-given principles upon which it is founded. Christians must locate those principles and conform their cultural activities to them.”

None of these spheres of life are inherently “ungodly,” fruitless, or less worthy of your time. If you’re passionate about something, identify why it matters to you, and figure out how and why it matters to God. How does pursuing that passion align with the kingdom? If someone tells you that something you care deeply about is worthless, or less significant to God, but you know that it’s not sin, identify the ways that pursuit fits into the body of Christ and the Great Commission (Matthew 28:18–20).

Some Christians see the church as existing outside of culture, or even fighting against culture, but the reality is that Christians are supposed to play a role in shaping culture. If culture is a byproduct of our interactions with the world, then Christians need to showcase a better way to interact with the world—we can’t just tell the world it’s wrong.

“4. In the aftermath of the first couple’s sin, all culture-making and cultural interaction is distorted and corrupted by sin.”

The only one who can eliminate sin is Jesus. We can’t expect the world to embrace a Jesus-oriented culture without also embracing Jesus. It’s also important to recognize that even as we follow Jesus, we can still make mistakes, and the church’s efforts to influence culture can still go wrong. We are not immune to sin’s influence.

“5. However, God graciously restrained sin and its consequences, keeping it from making the world an unlivable horror. In other words, he enabled people to continue their social and cultural lives.”

Left to its own devices, sin would literally tear our world apart. God allows sin to persist in the world, but he does not allow sin to triumph.

“6. In response to sin, God sent his Son to redeem his imagers and restore his good creation. He has given his Son all authority in heaven and on Earth. Christ is Lord over all creation and therefore Lord over every sphere of culture. We should bring our cultural activity under submission to his lordship.”

This circles back to point #2: every sphere of life can be used or abused to direct people toward Christ or away from him.

Abraham Kuyper is often quoted for saying, “There is not a square inch in the whole domain of our human existence over which Christ, who is Sovereign over all, does not cry, Mine!”

“7. Christians must draw upon God’s word and upon their Christian beliefs to guide them in their cultural projects.”

This is a constant process. We don’t read the Bible once and completely understand it. A lifetime of reading won’t even get you there. Properly shaping culture takes constant interaction between God’s Word and the body of Christ.

“8. As we enter the public square to work for the common cultural good, we should use reason and persuasion rather than coercion.”

Beating popular culture into submission reveals nothing about Christ. Instead, our cultural advances should arise through conversations about our shared goals to love other people and to create a culture where no person is oppressed, neglected, or unvalued. If we believe there’s a better way to do that, we should find ways to explain it in ways that make sense to the rest of the world.

If all of God’s laws can be summarized in the commands to love God and love others (Matthew 22:37–40), let’s try to show the world how the closer we come to honoring those laws, the more we love other people.

“9. When Christians leave the gathering of their churches on Sunday morning, they should do so consciously, seeking to apply their Christian faith to their cultural activities.” 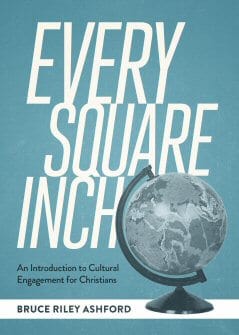 Most of us are only in a church gathering for a couple of hours each week. The rest of the week, we are the church—wherever we go. Sundays are training days where we continue our lifelong Christian education—church services are part of the preparation for the task, not the task itself. (Click to tweet.)

Want to learn more about the relationship between Christianity and culture? Check out Dr. Bruce Riley Ashford’s book named after Kuyper’s famous quote, Every Square Inch: An Introduction to Cultural Engagement for Christians.

Eight of Abraham Kuyper’s major works have just been translated into English for the first time. Learn more here.

Related post: 3 Views on the Relationship Between Christianity and Culture.