In Matthew 4:1–11, Jesus is led into the wilderness to be tempted by the devil. Whether you see this passage as a formula for resisting temptation, a glimpse into Jesus’ true character, or something else, there’s a lot we can learn by taking a closer look at this passage.

Then Jesus was led up by the Spirit into the wilderness to be tempted by the devil. —Matthew 4:1

The Faithlife Study Bible says, “God led his people through the desert for 40 years due to their unfaithfulness. The Spirit leads Jesus into the wilderness for 40 days so that his fidelity might be set in contrast to the nation’s infidelity.”

In the third layer of FSB notes, you’ll find a link to an article on “The Temptations of Christ” by John McKinley.

McKinley says, “Though sinless, Jesus experienced the moral struggle between the desire to do right and the desire to sin. This internal temptation is a basic experience all people encounter. For his mission of salvation, Jesus stood in the place of sinful people, suffered the onslaught of temptation, and triumphed by never giving into sin. . . . His empathy and willingness to help those undergoing temptation originate in his personal experience of enduring the struggle between desires for right and wrong. Hebrews 4:16 urges Christians to seek Jesus’ help as one who both understands and possesses the ability to provide aid to surmount temptation.”

If you’ve joined the Community Study Bible group, your FSB experience of Matthew 4 includes insights from other believers—academics and laypeople alike.

These notes expose you to insights from a range of people and perspectives, like these notes attached to Matthew 4:1:

David Taylor Jr. explains that in this passage, Christ models how we should prepare for and face temptation in our own lives: 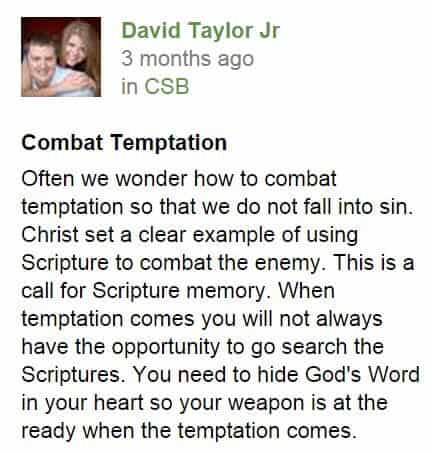 Dale A. Brueggemann shares a related quote from another resource—Ancient Christian Commentary on Scripture: And after fasting forty days and forty nights, he was hungry. —Matthew 4:2

When I first encountered this passage years ago, I thought the 40 days of fasting suggested Jesus was sustained by the Spirit, because that’s a long time to go without food. The FSB points out that this is not what the text is implying or emphasizing:

“Fasting during this time period meant eating nothing at all; people can safely go without food for a long period of time. The text does not seem to imply that Jesus was sustained supernaturally during his fast—instead, it emphasizes that he experienced hunger. His 40-day fast recalls the 40 years in the desert, Moses’ 40 days on the mountain, and Elijah’s 40 days in the wilderness at Mount Horeb.”

And the tempter came and said to him, ‘If you are the Son of God, command these stones to become loaves of bread.’ —Matthew 4:3

The FSB notes highlight three key pieces of this verse:

1. The tempter came and said to him
The text does not say whether the devil is in human form.

2. “If you are the Son of God”
The devil uses this challenge for all three temptations. He turns the words of Matthew 3:17 into a taunt.

3. “Command these stones to become loaves of bread.”
This parallels the Israelites’ failure in the desert. They complained that God did not provide enough food for them (Exodus 16:3). The devil preys upon Jesus’ hunger in an attempt to get him to misuse his power.

Dale A. Brueggemann adds a quote from Cyril of Alexandria, examining the devil’s motives for his request of Jesus: 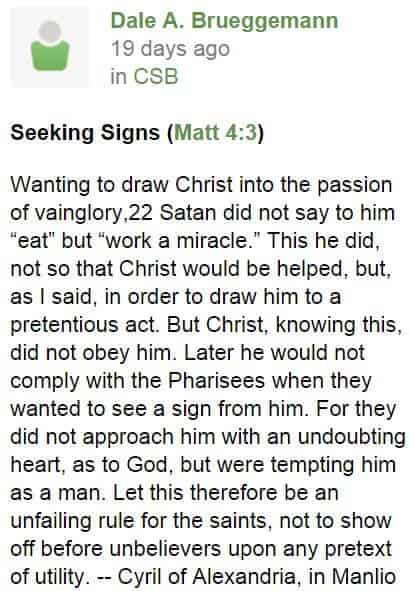 Food for thought: If Jesus was sustained supernaturally in the desert, then the devil’s request for a sign from God in the form of food would actually undermine the very miracle that was already taking place. While as the FSB points out, that isn’t necessarily what the passage is emphasizing or implying, the devil does consistently attempt to pit the Son against the Father, since the Father has already publicly affirmed his Son (Matthew 3:17).

But he answered, ‘It is written, “Man shall not live by bread alone, but by every word that comes from the mouth of God.”‘ —Matthew 4:4

The FSB says, “Jesus’ reply comes from Deuteronomy 8:3. In his temptation, he chooses to quote Scripture.”

Brueggemann adds two notes—a quote from Maximus of Turin and a reflection of his own: Then the devil took him to the holy city and set him on the pinnacle of the temple . . . —Matthew 4:5

When you read this verse in the FSB, you’ll find a video of Jerusalem’s Southern Steps, helping you imagine what the scene may have looked like: The FSB notes say that the highest point “likely refers to a high point on the front of the temple, rather than a point overlooking the Kidron Valley. If the devil is encouraging Christ to make a public display, the city side is likely.”

This public setting would parallel the public baptism, during which God already publicly revealed that Jesus was the Son (Matthew 3:17). By making this test public (and probably more prominent), it is as if the devil is saying that God’s voice was not enough to verify Jesus’ divinity.

. . . and said to him, ‘If you are the Son of God, throw yourself down, for it is written, ‘He will command his angels concerning you,’ and ‘On their hands they will bear you up, lest you strike your foot against a stone.’ —Matthew 4:6

The FSB says, “This test of God’s providence is far more extreme than any test Israel underwent in the desert. No biblical precedent exists for God’s choosing to save someone from falling in this way. Nonetheless, the principle mirrors Exodus 17—the people tested the Lord, saying, ‘Is the Lord among us, or not?’ (Exodus 17:2).”

When he says, “It is written,” Satan cites Scripture, “perhaps mocking Jesus’ quotation. Both lines come from Psalm 91, but are taken out of context. The original sense is that the Lord’s protection is so near and careful that his angels will not even let people hurt their feet while walking. It does not speak of the angels protecting those who make a show of jumping off buildings” (FSB).

The notes go on to say, “Psalm 91 had probably acquired a messianic interpretation in Jesus’ day. The devil is likely saying, ‘If you are the son of God, then these verses about the Messiah apply to you.’ Alternatively, the devil may only mean, ‘If this is the promise to ordinary humans, how much more should it apply to you as God’s Son?'”

In the Community Study Bible, Brueggemann shares a quote from St. Jerome:

Jesus said to him, ‘Again it is written, “You shall not put the Lord your God to the test.”‘ —Matthew 4:7

Jesus quotes Deuteronomy 6:16, “which refers to the Israelites’ testing the Lord in Exodus 17:2–7. The devil tempts Jesus to doubt the Lord’s providence like the Israelites had” (FSB).

But the devil is persistent.

Again, the devil took him to a very high mountain and showed him all the kingdoms of the world and their glory. —Matthew 4:8

There is some ambiguity surrounding the word we translate as “showed.” The FSB notes highlight this term:

“It is uncertain what the evangelist means to describe. The word deiknymi means ‘to show or point out.’ The devil probably simply points out the general direction of the kingdoms of the earth, naming them as he does so. Visions or physical movement may be involved, but this text does not mention such phenomena.”

Brueggemann shares his own insight into verses 8 and 9: And he said to him, ‘All these I will give you, if you will fall down and worship me.’ —Matthew 4:9

Despite the truth of Psalm 24:1, the devil is preying on Jewish perceptions in Matthew 4:9.

“By Jesus’ time, Jewish people commonly regarded the nations surrounding them as the domain of the evil one. They recognized that the earth was the Lord’s, but they believed the kingdoms of wicked rulers were in the service of the devil” (FSB).

The FSB also provides clarity about the phrase “worship me”:

“The word proskynēsēs does not necessarily refer to religious worship; it can also be used to describe the honor due to an earthly king in antiquity.”

The second layer of notes goes into more detail:

“Here, the devil tempts Jesus to trust in worldly power rather than the power of God. The Israelites were also tempted this way in the desert (and afterward, in the land of Israel). In Numbers 13, the scouts gave reports that the inhabitants of the promised land were too strong. The Israelites despaired because of their lack of faith. Here, the devil implies that God’s chosen one would need help in coming to rule all things—as the Messiah was expected to do. But Jesus’ kingdom is of a different sort—it is the kingdom of God.”

Brueggemann shares a thought inspired by the devil’s promises: 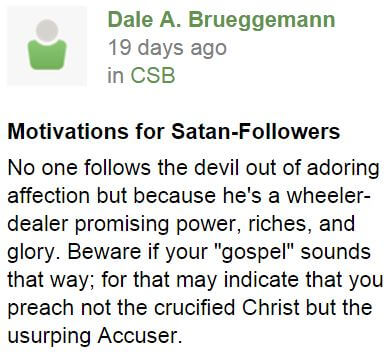 Finally, Jesus has had enough.

Then Jesus said to him, ‘Be gone, Satan! For it is written, “You shall worship the Lord your God and him only shall you serve.”‘

“Jesus later says something similar to Peter (Matthew 16:23), who had been speaking against Jesus’ death and crucifixion. Peter probably hoped for the sort of worldly power the devil had offered” (FSB).

Then the devil left him, and behold, angels came and were ministering to him. —Matthew 4:11

“In contrast, Luke mentions that the devil departs only until a more opportune time. . . . Jesus could have simply driven the devil away; instead, he chooses to undergo the temptations. As a result, the author of the book of Hebrews writes that Jesus was tempted in all things as we are, yet is without sin (Hebrews 4:15)” (FSB).

Jesus could have dismissed the devil the moment he appeared, but because he didn’t, we have a Messiah who knows what it means to be weak, tempted, and human (Hebrews 2:18).